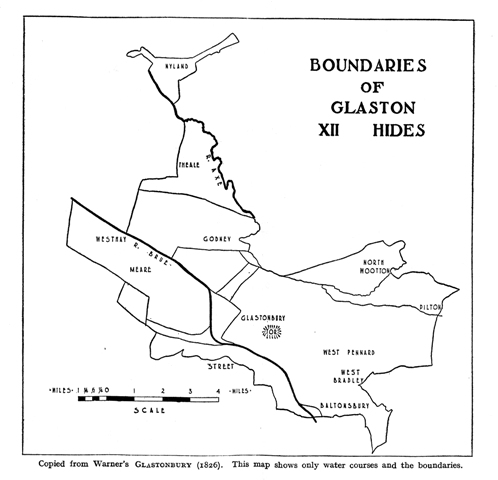 BEATING THE BOUNDS WITH ABBOT BERE

The following important official document on Abbot Bere’s Perambulation of the Glaston XII Hides was translated by Coun. H. F. Scott Stokes, F.S.A., and read as a paper to members of the Glastonbury Antiquarian Society on 27th January, 1940. The paper was printed in instalments in the February, 1940, issues of the Central Somerset Gazette, from which journal it is now reprinted.

The whole world knows by what noble and shining acts of munificence this ancient Abbey was formerly endowed, and so flourished under a succession of wise and holy Abbots. But it would not be at all right to omit from the number of our benefactors him who still in full splendour before all men’s eyes most deservedly holds the high office of Abbot of Glastonbury; I mean of course Richard Bere, a man of strict monastic obedience, much given to the godly virtue of abstinence, and a most saintly benefactor of the poor and reliever of their distresses, so that one may truly say he Does not hide his light under a bushel, but rather in the words of Our Saviour, shines forth before all that are in the House of the Lord, filled with the holy spirit, having from the first set his foundations not on shifting sands, but on a rock, keeping always before his eyes the teaching of our pious founders when they said again and again that here in Glastonbury was the origin and fountain-head of all Christianity in England.
He has laboured incessantly at all times to fill with holy zeal this community of the church militant entrusted to his care, both by the example of his own righteous and godly life and by due discipline, by his sermons and by his writings, wrestling with them like a good athlete, after the example of the Apostle Paul, by prayer and exhortation and argument; and he has safely brought them and led them along the road to salvation in brotherly unity, having first most vigilantly uprooted certain thorns and tribulations from his good glebe-land, with all the energy that such a good husbandman will have at his command. He then very prudently turned his thoughts in no niggardly spirit to certain temporal matters that needed attention, within and without the Abbey, first of all to the completion of the Abbey-Church, as in the words of the prophet, “Lord, I have loved the beauty of thy House, and the place of the habitation of Thy Glory.” But it would be tedious if I were to set out in full with what noble buildings he has enriched the said Church and the remainder of the Abbey. His buildings are daily before the eyes of all men, and so I leave to other pens and panegyrists the recital of all that he has built, within and without the four walls of the Abbey, and come at last to my own modest concern which, under God, I have undertaken.
For the said holy husbandman and father of his flock in the twenty-second year of his rule as Abbot, reflecting on what the philosopher says, that When the cause ceases, its effects cease too, and acting on it; and reflecting like a wise father that the days of man’s life are short and his senses sluggish, whence it follows that his energy and his memory are both fitful and failing; he therefore putting on one side for awhile all other and singular his cares and concerns, did of his own free will closely examine the muniments, in other words the private books of the Estates Bursar, faithfully kept in times past by our founders and forerunners, but now (frankly) neglected on account of the idleness or in­difference of succeeding generations, and found in fact few records and those not in very good order.

He therefore in great distress absolutely insisted on at once putting in hand this pro­digious labour (which I have made bold to call a Terrier), to be compiled with the utmost care and diligence, and he put down money to pay for it. Like the good father of a family that he was, he was determined to secure the livelihood of his flock, at home and away, and of their guests, by making sure that there could be no possible doubt about the validity and extent of the grants of their pious founders, or about any detail of the same.

And reflecting in his wise way that a task like this would be a most difficult undertaking, not to say a labour of Hercules, needing not only industry and application, but also men of standing erudition and judgment, in accordance with the old saying, Take counsel first about all your doings, for you will rue it later if you don’t, he appointed to this laborious undertaking the following eminent persons, namely: his most faithful friend and counsellor, John Fitzjames, Esquire, barrister-at-law, at that time Seneschal of the Abbey; William Long, auditor and clerk to the reeves; Thomas Gunwyn, clerk, and master of the rolls of the said Abbey and official of the feudal court, and also chief surveyor on this occasion; together with his trusty John Horner, surveyor, Bailiff of Whitstone: and divers others, together with Thomas Somerset and William Walton, clerks of the Abbey Treasury for the time being, assistant surveyors; and your humble servant, Brother Thomas Sutton, an unworthy member of this religious community, now Estates Bursar to the same; and I have done my duty in the matter as best I could, together with the aforesaid officers and others. And if any little details of the lands, fields, pastures, plantations and forests have escaped me, and my pen has not noted them in the present Terrier, well, you must attribute it to my lack of knowledge and not to any bad faith please.

I have done all I could, though not all I wished and intended; as the wise Solomon hath it, Things are so complicated, that the tongue of man  cannot tell them all in every detail.

Item, I counsel thee, wise reader, to ponder closely and circumspectly the details of this Terrier, what lands are rich and what are poor. It is not just a matter of counting the acres and noting the boundaries and the extent of the holdings. And so when you roll or unroll one sheet or another of this Terrier (as you will have to), do not think that you are to study it for any theoretical purpose; for its plain practical purpose is to make you a sound sensible practical farmer, or at least overseer of farms; for in the words of the philosopher, All practical experience depends upon seeing and smelling and touching and tasting and hearing things for yourself; for all knowledge comes to us through our five senses.

Item, I have carefully put headings on each sheet of this little work, sheet by sheet, so that the reader may more readily find the particular manor he is looking for.