Glastonbury Museum at the Tribunal

We are pleased to announce that Glastonbury Museum opened its doors for the first time on Saturday 28th and Sunday 29th May. The museum will now be open from 10.00am to 4.00pm each weekend. The entrance fee is £2.00 for adults; accompanied children under 18 years of age are free. Glastonbury Antiquarian Society members and English Heritage members have FREE admittance.

As our project develops the museum will gradually gain more cases and exhibits. Aside from the permeant Lake Village exhibition, we currently have a collection of early 20th century Glastonbury Bowls on display and Richard Whiting’s Dish and Letter.

*Please note that as we are an entirely volunteer lead project, there may be some times that we cannot open, if volunteers are unexpectedly unavailable and we do not have enough people to open the building safely. If this happens on your visit we most sincerely apologise for any inconvenience caused.*

The Glastonbury Antiquarian Society is happy to announce that it has taken on the lease of the late medieval Tribunal building in Glastonbury High Street. The Tribunal had for many years been used as the town's Tourist Information Centre, with the society's Iron Age collection - the Glastonbury Lake Village 'Museum' - on the building's first floor. With the TIC's relocation to St Dunstan's House, the opportunity arose for the society to turn the whole building into the town museum. Due to financial and health challenges over the last few years (Covid 19), the process of creating a new museum has been a gradual one, but Glastonbury Museum will be opening from the end of May, 2022. As this is an entirely volunteer led project, objects, cases and displays will be gradually introduced to the building over the following 18 months - please don't expect a fully-formed museum from day one! 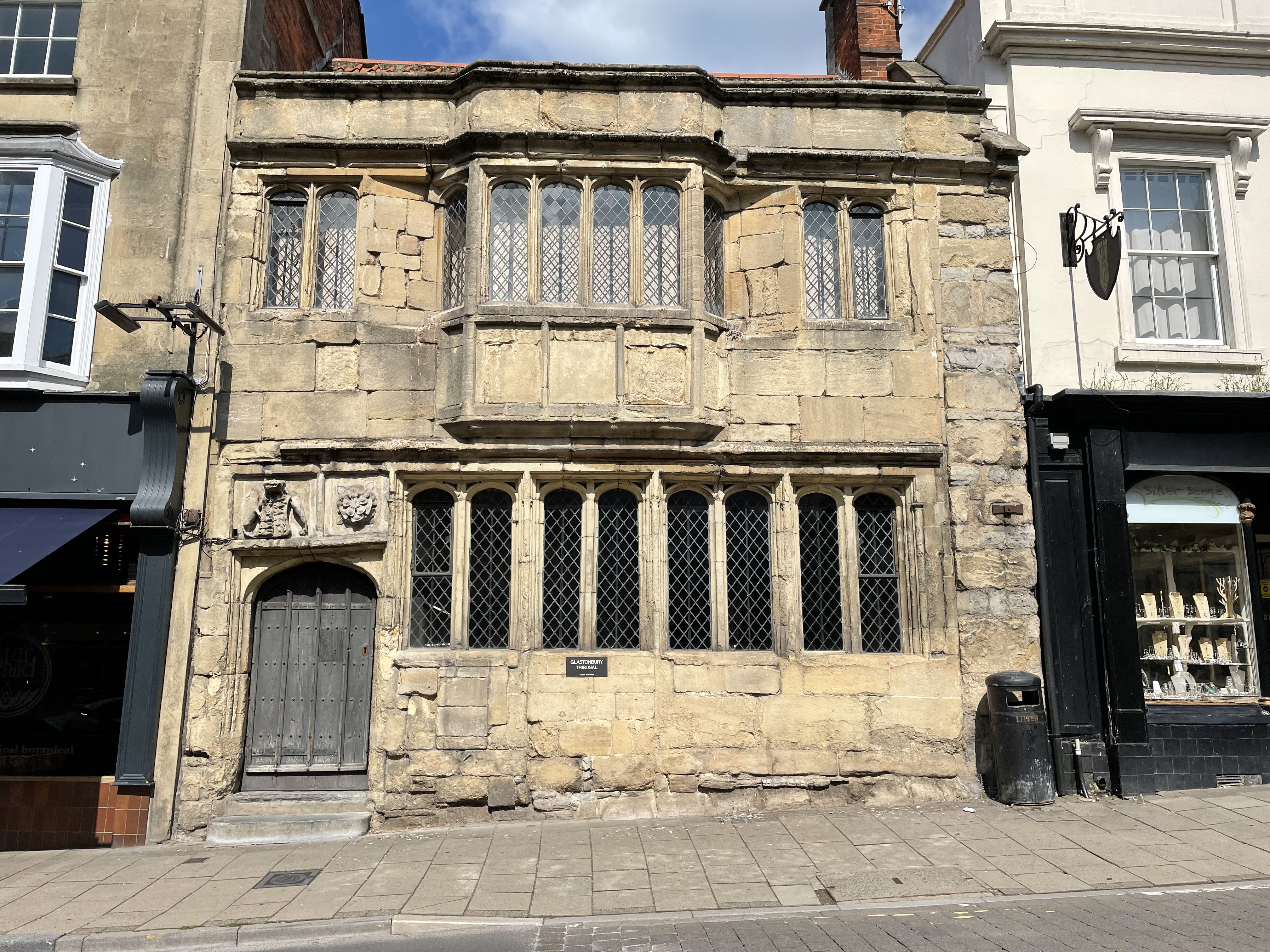 Working in partnership with English Heritage, the medieval Tribunal building will once again be accessible to the public. Many objects from the society's collections, which have been in storage for over forty years, will be going on display, as will objects loaned to the museum by people locally.

A Short History of Glastonbury Museum

Glastonbury's first museum was established at the Town Hall in 1886. Located in the small hall at the front of the building, the museum consisted of two wood panelled rooms, fitted with wood and glass display cases. Larger objects were stood on the floor, while others were framed and hung on the walls. Labels were hand written and the caretaker was always present to answer questions. In later years, the museum gained a Custodian and finally a Curator. 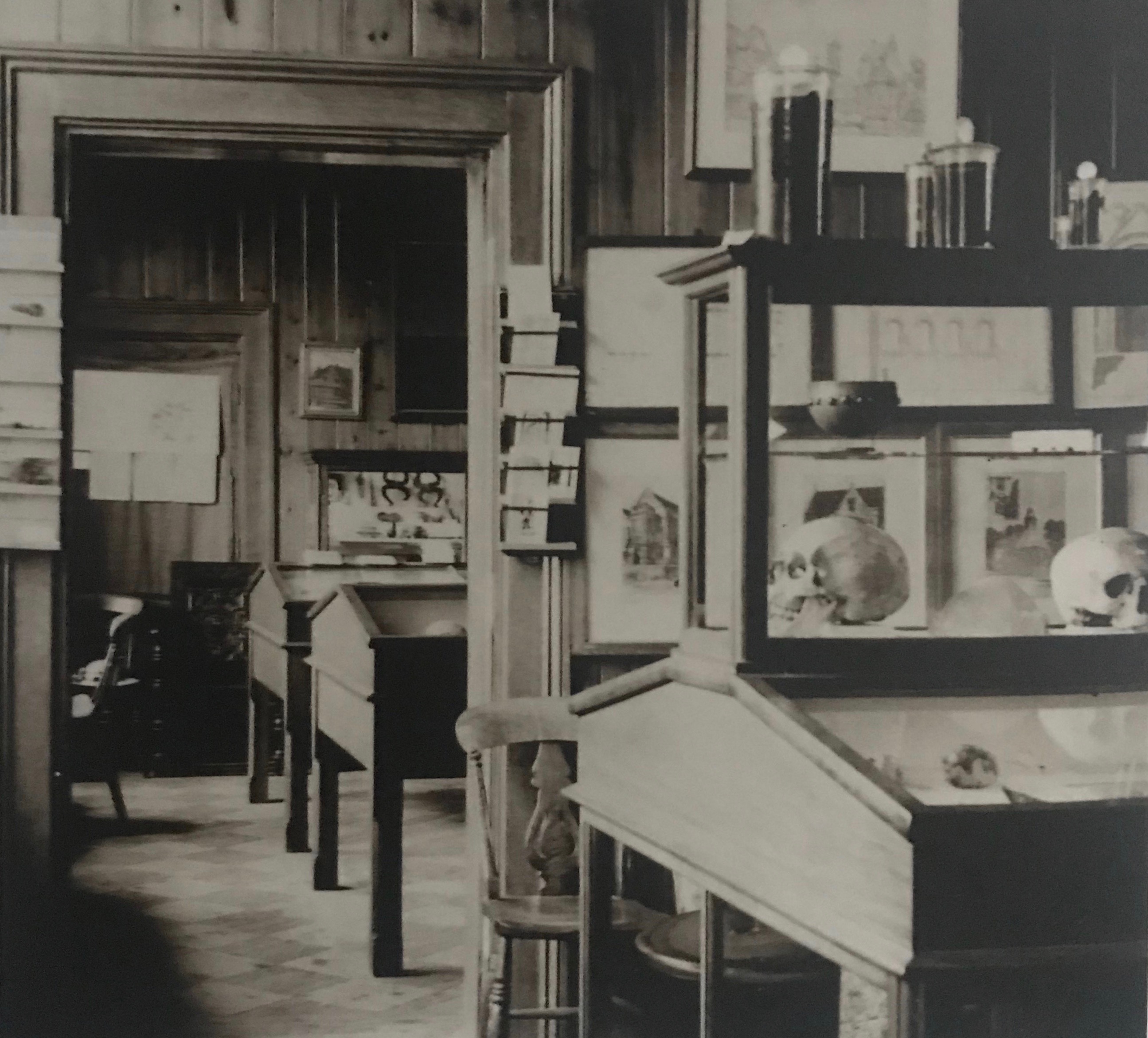 Glastonbury Museum in the small hall of the Town Hall c. 1900.

The museum's contents were varied. The Town collection consisted everything from medieval stained-glass fragments to sugar tongs, while the library encompassed ephemera as well as books. The Lake Village collection of Iron Age artefacts was displayed alongside everything else. The overall effect was typically Victorian - cramped and eclectic, but highly informative and impressive in scope.

An exampe of the 'Glastonbury Museum' stamp, used from 1886 till c. 1900 on both books and ephemera.

After the Second World War, the Town Council needed the extra space in the Town Hall, so the museum was relocated to the Tribunal. As there wasn't quite as much space, some objects were put in storage and the Lake Village Collection occupied two of the three rooms on the first floor. When the TIC moved into the building to help run the museum, the collection was again reduced, being restricted to the upstairs rooms. After the theft of some Bronze Age objects in the 1980's, the back room upstairs was closed and the remaining objects from the town collection were put into storage only leaving the Iron Age artefacts, the collection being called the Glastonbury Lake Village Museum. 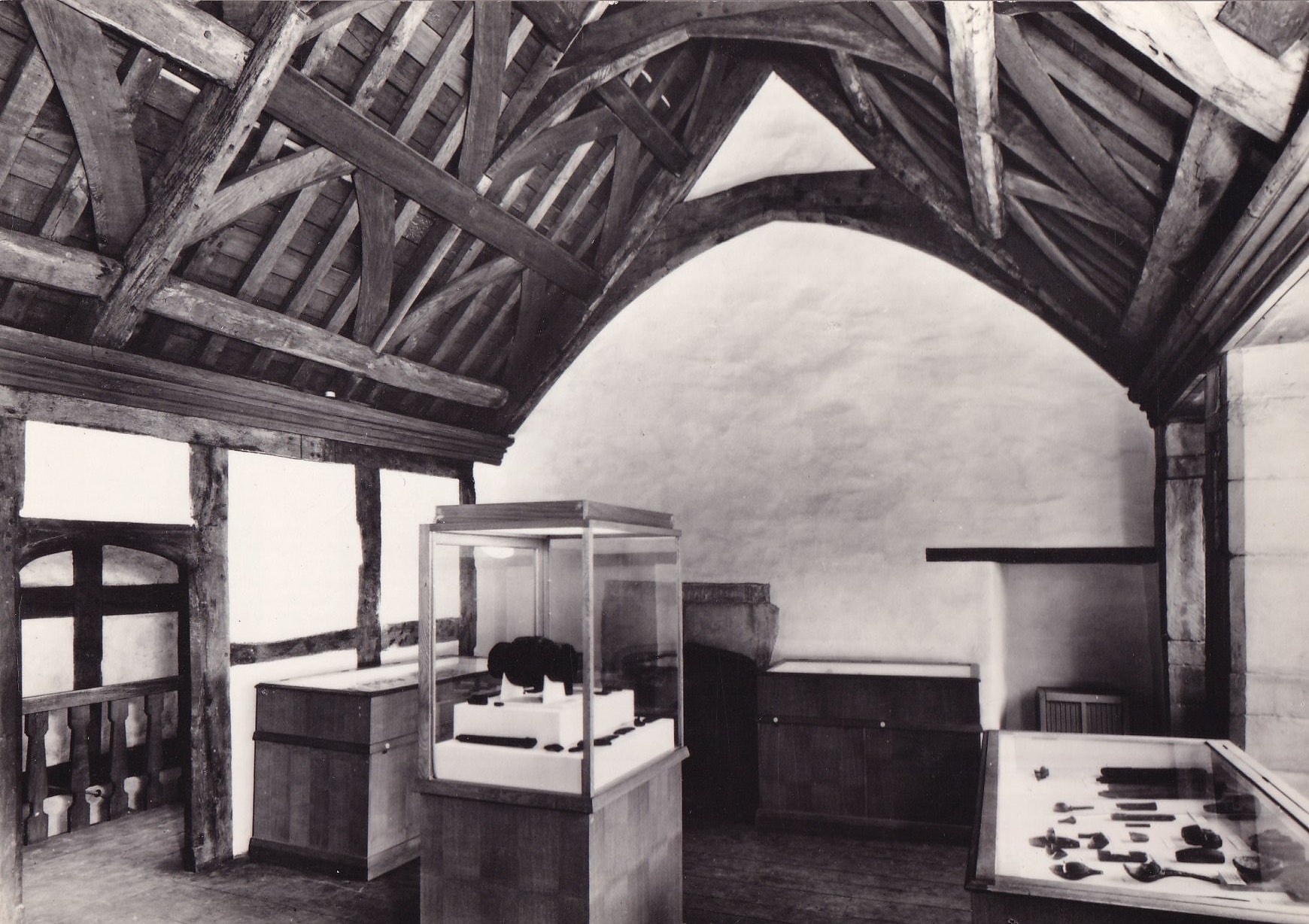 Part of the Lake Village collection on display in the front, upstairs room of the Tribunal, c. 1970.

Finally, when the TIC relocated to St Dunstan's House, next to the Town Hall, the Tribunal was closed to the public and the Glastonbury Lake Village Museum was mothballed. The building's future was uncertain. We are fortunate that the Tribunal is once again secured for the town and the museum will be opening to the public.